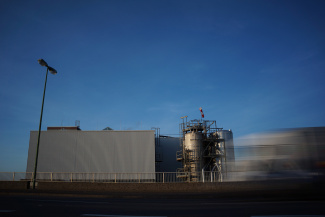 I did a little bit travelling by bicycle and once came across a small chemical plant. I took a series of about 20 long term insolations.
Essen is not really a very bicycle friendly city because the city counsel is emphasizing bicycles as recreational vehicles and therefore they build nice bicycle lanes for bicycle tours - but not for day to day bicycle riding.
Getting to work by bike was in my constellation simply a night mare. I had to drive big road with no bike lane, crossings with no bike lights, etc.
Sooner or later (I guess later) the Essen citizens will realise that there is another transport vehicle than a car. Who needs to drive a car for 10 minutes when it takes 15 to get there by bike.
It take a lot of political will to transform the city from car usage to bike usage. Copenhagen and NRW's neighbors, the Netherlands, showed and proved it already. Actually Münster does it as well. People in Essen are just to lazy to get their asses on bikes. Or in my cases: think that bicycle riding in Essen is simply dangerous.

Why I call this photo chemtrail? Hmm...