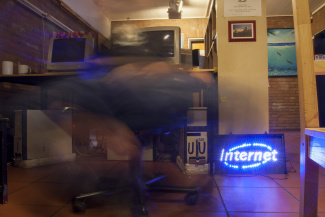 The Unperfekthaus was a pretty nice place during my first 5 years in Essen. They had a "Linux User Group" a "Drupal User Group" a "Typo 3 User Group", and so on. So, a lot of people from the Open Source scene met there. It is one of those good starting points.

As the head of the association "Open Ruhrgebiet e.V" I had the organized 4 Drupal-Camps at the Unperfekthaus. I also got my own hackspace called "SchaltWerk".

The photo shows a Linux sysadmin turning around on a chair. In the background you can see the "Internet cafe".