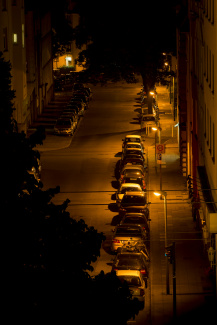 Cars, cars, cars. Those cars need more space than the people. Streets are everywhere. Do you see bikes? No, of course not. Why should a city like Essen forster bike lanes or bicycle traffic? We might just become a second Münster or Copenhagen and that is not in allignment with the "strukturwandel" (structure of change). The car is the transportation of choice for most people in the Ruhr-Area. If you don't own a car you are a nobody. But a car uses petrol. And burning petrol produces a lot of CO2 and NOx. But who cares for fine dust? Public transport is a nightmare. The Evag is often called "Efuck". I had to take the line 109 very often. In most case this line is not punctual and sometimes this even means waiting for half an hour.